Cyprus is fortunate to be at the southernmost part of the Mediterranean situated just off the coast of Turkey and close to Egypt meaning a temperate climate for most of the year.

Paphos is conveniently situated on the West coast of Southern Cyprus which has slightly milder weather than the East.  Paphos is slightly cooler in the summer months (also temperatures can still rise to 50 degrees in August!) and the winter weather is milder too with the lowest dip in daytime temperatures being 15 degrees on the coast.

In the winter months however it is possible for you to drive for an hour into the snow filled Troodos mountains to ski on one of the many slopes there and then return to the coast for an apres ski barbeque sometimes still in temperatures of 18 degrees – freezing cold to a Cypriot but pretty warm if you’ve come from the UK!

The Troodos mountains can be picturesque in the winter with the snowy pine forests resembling a Christmas card winter scene ensuring that the British and Northern European ex-pats don’t get home sick.

The Cyprus ski season usually lasts between 4-6 weeks from February-March check this website for updates on weather for skiing in Cyprus and updates on the opening of the slopes http://www.skicyprus.com/

What could be better than a ski and beach holiday rolled into one? 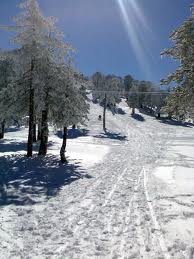